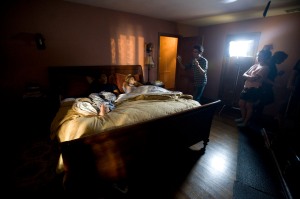 What is it about old toys that are so damn creepy?  You can’t deny it; there’s just something sinister about a raggedy doll or a smiling puppet, but filmmaker Nick Everhart shows us that Chucky may be the least of your worries in his ultra-gory short, “Slash-In-The-Box.”

“I had been wanting to do something that was kind of like 80s style horror, where it doesn’t take itself too seriously…where it’s kind of a little tongue-in-cheek and a little bit of campiness to it but also with some legitimate scares,” Everhart told LAHorror.com.

Do yourself a favor and turn the lights off before you watch it.

You jumped, don’t even try to deny it.  “Slash-In-The-Box” was filmed in one day and cut in a week, all on a very small budget, which is exactly why Everhart encourages other young filmmakers to pursue their dreams and create their visions.  “I tell everyone, don’t say that you’re an aspiring filmmaker or an aspiring artist…because if you’re a filmmaker, then make films.  There’s no excuse not to…It’s such a great time right now for young filmmakers to create stuff and get it seen by a wide audience,” he said.

Though Everhart knows that you sometimes may first have some dues to pay.  He began his film career as a production assistant at LA’s “mockbuster” powerhouse, The Asylum.

“I kind of worked my way up the ranks.  After about six months, they actually let me direct one of their movies,” Everhart recalled.  From there, Everhart went on to produce several Syfy Channel movies as well as “Dorothy and the Witches of Oz,” a star packed feature film turned mini-series that revisits the classic tale of wizards and witches.

Everhart’s newest film, “The Scout,” will be a part of a horror anthology, co-directed by Leigh Scott and Eliza Swenson, entitled “The Penny Dreadful Picture Show.” Here’s a sneak peek of Everhart’s segment, which looks campy in much more literal way.

Well, we’ll be throwing away our tents now.  Thanks Nick.

For more on Nick Everhart and his upcoming projects, please visit his official website.