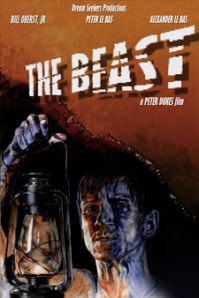 Most horror fans become enticed by the genre at a young age.  We all remember being terrified of the Wicked Witch of the West and her flying monkeys.  We’ve had nightmares after reading “Goosebumps” books under our blankets with flashlights.  We all remember being frightened on Halloween, even though our parents were close by to protect us.  Horror is a crucial part of our culture at every age, which is why LAHorror.com is proud to present Peter Dukes and Dream Seekers productions.

What Peter Dukes has created is a wide variety of horror films in a multitude of genres and, more importantly, films that inspire seasoned horror veterans as well as children young and old. “I’ve always prided myself in diversifying what it is that I do.  I have the interest in telling all sorts of stories.  I love all types of genres,” Dukes told LAHorror.com.  And his films do just that.  From whimsical and magical, to brooding and suspenseful, Dukes films are all horrifying on completely different levels.

One of the more lighthearted horror films we’ve seen yet is “The Scarecrow & The Princess.”  It’s hard not to love this movie, and the ending will leave your imagination running wild.  We must warn you that the following film is rated PG (parental guidance suggested).

Keeping in the fantastical realm, “A Goblin’s Tale” is one of those films that isn’t necessarily straight horror, but does have a sinister side in an otherwise magical story.  It stars Tiffany Giardina of Radio Disney and features some pretty excellent make-up work and design.

But children’s storytelling isn’t all that Dukes does—not even close.  “There are a lot of different types of horror out there.  My horror tends to be a little more cerebral.  A little more psychological,” Dukes said.

And that’s what makes his films so unique; it’s less of a blood and guts show and more of a mind game.  Take for instance, “Lanrete.”  Dukes takes the classic and often super gory zombie genre and spins it upside down with some terrific and disturbing results.  “I intentionally kept this film very ambiguous and I did that for very specific reasons,” Dukes explained.  And the ambiguity is what makes this film work.  While Dukes may have written a zombie film, it’s really up to audience interpretation as to what is really going on here.

Dukes latest film, “The Beast,” is another character drama that has a vicious horror twist.  The film features stellar performances by Bill Oberst Jr., Peter Le Bas and Alexander Le Bas.  The trio brings this beast to life, pun intended.

We expect to see a lot more from Peter Dukes and Dream Seekers productions.  With “The Beast” hitting the festival circuit this year as well as a plethora of other scripts in the pre-production stage, we hope that these films will continue to inspire both the young and old, fantastic and realist and living and dead alike.

For more from Peter Dukes the films of Dream Seekers Productions, please visit their official website.