Curiosity can be a dangerous thing.  It’s the cause of many problems for people in horror films and something that can ultimately become deadly.  How often do we see someone investigate a strange noise, pursue a forbidden curse or, in the case of “An American Ghost Story,” the new film from 2 Man Production, knowingly invite themselves into the home of a malevolent spirit?

Paul Anderson (Stephen Twardokus) is an aspiring writer who’s trying to get it together.  You see, Paul has never finished anything he’s set out to do, and with his new idea he’s more determined than ever.  Unfortunately for him and his girlfriend, Stella (Liesel Kopp), his new idea involves moving into the home of a recently murdered family and trying to communicate with its restless spirits.  Before long, both Paul and Stella realize that they are not alone and certainly not welcome…

The set up for “Revenant” is simple, but the execution is fantastic.  What filmmakers Derek Cole (director, producer), Stephen Twardokus (producer, writer, actor) and Jon Gale (producer, actor) have done is create a bare bones story that still manages to scare the piss out of you with a “less is more” mentality.  Wait, I take that back— “less is more” may not be an accurate way to describe this movie, because it is FULL of legitimate scares.  From your classic jumps to your slow, sinister sequences, “An American Ghost Story” keeps you on edge from the very first scene until the last.  It’s tense as hell and doesn’t let up.

What works about this film is its overall creativity in the things seen on screen.  As a filmmaker myself, I was perplexed as to how these guys pulled off some of these sequences.  There are no CGI ghosts in this movie, and the practical effects are ridiculous and always frightening.  From the spirit rising out of the bed sheets to an entire kitchen erupting in rage, the ingenuity behind the camera is this film’s most impressive feat. 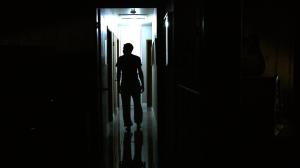 Yet, all of the horror elements in “Revenant” are amplified by Cole’s stellar direction.  His choices to make slow zooms, subtle camera movements and some clever editing always keep you in anticipation.  Every scene has the ability to give you frights and, trust me, most of them do.  Cole is clearly well-versed in the art of suspense, and fans of classic ghost stories such as “The Haunting” or “Poltergeist” would certainly enjoy “An American Ghost Story.”

While this film is exceptional in terms of the talent behind the camera, without good performances all may be for not.  Luckily for “An American Ghost Story,” it’s cast, though small, all pull their weight and add to the overall success of the film.  In particular, our leading man Twardokus plays the over-curious writer believably, and you can clearly see the shift in him when he realizes that he’s in far over his head in this house.  Liesel Kopp as Stella is the most relatable of the characters, given the fact that she is the rational of the two and is far more afraid of these spirits than her boyfriend.  Kopp really shines when things get rough.  Her panic and fear are felt through the screen.

“An American Ghost Story” is damn scary, and that’s no joke.  My advice to you if you get the opportunity to watch it:  give this movie the respect it deserves.  That means phone off, lights off, popcorn and a beer.