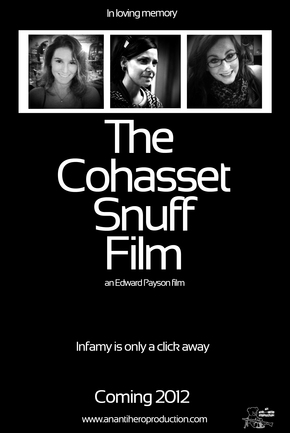 Does life imitate art or does art imitate life?  It’s a tricky question, especially when you apply it to the world of horror, given all of the atrocities that happen on a daily basis all over the world.  Director Edward Payson‘s “The Cohasset Snuff Film” blends the fictional world and the real world together, giving us an up close and personal look into the mind of a serial killer in a chilling way.  At times, it’s hard to determine if what you are watching is real or merely the fantasy of a couple of disturbed but talented filmmakers.

“The Cohasset Snuff Film” is real, or so they say.  The film begins with a pair of documentarians as they uncover the secret tapes of Cohasset, Massachusettes best kept secret:  serial killer Colin Mason.  You see, Mason killed three girls in 2009 and had the good sense to get it all on camera.  In a quest for infamy, Mason compiles a series of video diaries plotting, and executing, his plans for inflicting pain and torture.  Now you can see the footage for yourself in every horrifying detail.

This film is a tender reminder of just how fucked up this world really is.  With murder sprees and serial killers seemingly popping up all the time these days, this film feels relevant.  And this is certainly one that will attract the morbid curiosity of both experienced and novice horror viewers.  And when I say novice, I mean the kinda of kids that sneak horror movies into their slumber parties, that watch them when their parents aren’t watching or don’t know.  I say that because the killer in this film is in high school, and what sort of normal adolescent hasn’t fantasized about murder at one time or another?  This film will no doubt be a dirty little secret for many viewers.

But while the idea of this movie hits close to home, our lead character is a little harder to sympathize with.  I always like rooting for a killer.  It’s fun and makes you feel a little guilty.  Yet, the one thing I felt was missing from this film was a strong motive for this killing spree, but that doesn’t mean it isn’t there.  Colin Mason is obviously resentful of his fellow humans for the typical reasons – being ignored, abused and picked on, however we never really see any of that on film.  While we do learn about the human side of our killer through classmate interviews, psychology studies and the police reports, the face to face time with Mason is long past his days of being “normal.”  It’s less of a descent into madness as it is being just thrown into the mix right before shit goes down—and shit does go down.

The great thing about “The Cohasset Snuff Film” is its raw intensity.  There are no jump scares or cheesy twists.  This film is grounded in reality and the murders are real.  Some mad props go to these actors who certainly had trust in director Edward Payson and believed in this project.  Their trust will no doubt be rewarded as this film will certainly be getting some pretty big attention in the near future.  I say that with no hesitation, because this film has all of the right pieces to be an underground hit.

On a hilarious side note, supposedly some people in Cohasset, Massachusettes are pretty upset that this film has been made.  Now, why they are upset is up for debate.  Maybe they don’t want their town to have a bad reputation, or maybe they just don’t want to be associated with something as nasty as “The Cohasset Snuff Film.”  Or maybe, just maybe, there’s a little more truth to this film than originally thought.  That’s why I recommend you check it out and decide for yourself.

If you are living in the Los Angeles area, the world premier of “The Cohasset Snuff Film” is fittingly this Halloween in North Hollywood.  You can purchase your ticket here.  If you’re not in the Los Angeles area, the film is beginning a self distributed theatrical run in limited cities.  If you want to see this film in your area, then visit this page and demand to see “The Cohasset Snuff Film!”

LAHorror.com has previously interviewed director Edward Payson about this film and other horror projects.  You can read that here.  Be sure to check out “The Cohasset Snuff Film” on Facebook and Twitter.