It’s been a while since our last post, horror lovers, and for that we apologize!  With all of the holiday travels, crazy life and pre-production of our upcoming horror film series, it’s glad to finally be back from the dead to share with you some excellent horror projects coming your way from some seriously talented artists.  And what better way to ring in the New Year than with a good old fashioned 80’s throwback slasher flick, from Slasher Studios: 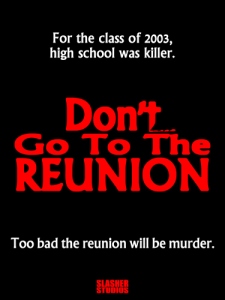 LAHorror.com got some insider information on this film from the filmmakers themselves Kevin Sommerfield and Steve Goltz, who are currently raising money for this gory feature film, and trust me, these guys know how to make a slasher flick.  So do yourself a favor and check out this project, because, let’s be real, there hasn’t been a great slasher flick in far too long…

LAHorror:  I know you guys are the slasher experts, so tell me:  What’s going to make Don’t Go to the Reunion stand out from the crowd?

Kevin Sommerfield:  Don’t Go to the Reunion is really our ultimate 80’s slasher homage to everything that we love and cherish about the slasher genre.  We are going back to the basics:  a likable final girl, characters you actually care about, a ruthless, nonstop killer.  We also plan to use all practical effects on this slasher.  CGI has it’s place in film but I don’t think it really belongs in the slasher genre.  The blood, the gore, the carnage…everything is going to be done on set with some great deaths planned out.

Steve Goltz:  This upcoming film will give our fellow slasher fans what they have been craving.  With a slasher drought among us, horror fans are in need of a fun story with likable characters and creative deaths.  This is exactly what we will give them.  The story itself will give the movie goers something to talk about after the film and the fact that this will be made by slasher fans, for slasher fans, will make this all the better.

LAHorror:  Tell us a little bit about the set-up and the characters.  And what’s the deal with this killer??

KS:  Don’t go to the Reunion centers around a horror loving geek named Scott.  He cherishes horror movies more than life itself.  When the popular kids at his high school decide to play a prank on him, Scott thinks his life is over.  Skip ten years to present day and the popular kids from high school are getting together for a little class reunion.  Little do they know, someone may have followed them there and they mysteriously disappear one-by-one.  Throughout this all, the audience is left to wonder if Scott has come back for revenge or is it someone else all together.  Possibly even one of the original popular gang…

SG:  The true horror fans will love the characters.  I am so excited to see the characters take life and watch the performances on screen.  We definitely have the go-to slasher characters, but some with a modern twist.  They are fun and clever and all bring something to the table that helps out the story.

LAHorror:  Without spoilers, what kind of gore can we expect from Don’t Go to the Reunion?  Can you give us a peak into your favorite kill from the script?

KS:  Without a doubt my favorite death from the script involves a split open torso and a fire poker.  I’ll leave the rest up to the audience’s imagination…

SG:  Well, we don’t want to give too much away, but the fire poker death will be a great visual experience and the final death of the film will definitely leave the audience in awe.  All in all, lots of blood and gore and as with every Slasher Studios film, all practical effects!

LAHorror:  All the slasher greats have a memorable final girl.  In Don’t Go to the Reunion, what’s your final girl’s motto:  Fight?  Or flight?

KS:  Definitely fight.  Our final girl Erica is no shrieking violet.  I wrote her as a testament to my favorite final girls in slasher history.  Much like Ginny in Friday the 13th Part 2 or Nancy in A Nightmare on Elm Street, Erica isn’t about to go down without a fight and, in the end, she realizes it is up to herself to survive the night.

SG:  This final girl encapsulates all the great, strong, independent final girls who came before her.  We were not looking for a weak final girl or performance.  This girl is rough and tough.

LAHorror:  Your short films pack a lot of punch in a little time.  How are you guys approaching this project differently than something shorter?  Are you ready for the challenge?

KS:  It was definitely a change of pace.  Between Teddy, Blood Brothers, and Popularity Killer, we killed a series of a dozen characters in a total running time of about 40 minutes.  Here we had a chance to give the characters a little more depth and flesh out the back story of each.  I want the audience to get to know these characters so they actually feel something when they die.

SG:  What I love about shorts is that a lot can happen in a little amount of time.  This really helps keep the audience glued to the screen and their interest level high.  Teddy moved at a break-neck speed and really sold a lot of people on the film.  No downtime to bore the viewers.  So, we know going to the feature, we had to keep up a steady pace.  With the serious parts, the outrageous deaths and the comedy squeezed in as well, this script really has a great mix of emotions and will for sure keep the audience on their toes.

SG:  Don’t Go to the Reunion has been on our minds nearly every minute of every day for longer than I can even remember.  Film is our passion and this feature is something we have worked so hard on and will continue to do so.  We are both overly excited to begin filming and can’t wait for that first screening with an audience full of horror fans like ourselves!

KS:  All I can say is that this script and this movie has been my baby for the past year.  I can promise that fans of the 80’s slasher will find a lot to enjoy here from the creative death scenes to the shocking ending.  To quote Cotton’s character at the end of Scream 2, “It’ll make a hell of a movie.”