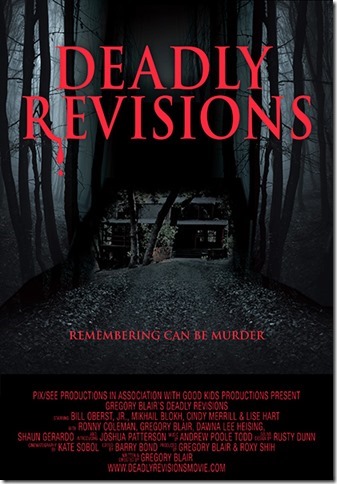 A horror writer.  A hypnotherapist.  A cabin deep in the woods. These are just several pieces to Gregory Blair’s puzzle in his twisty-turny directorial debut “Deadly Revisions,” a freaky new thriller that will no doubt be a delight to the true horror viewer. This isn’t the type of horror flick that’s going to throw blood at you on every shot or have many gratuitous scenes, but rather a slow burning mind fuck that will get under your skin and no doubt keep you guessing until the very end. As an overall fan of the genre in general, there’s a hell of a lot to appreciate about this flick.  Did I mention that it stars horror super stud Bill Oberst, Jr.?

“Deadly Revisions” was the first featured project on LAHorror.com, and it’s great to see Gregory Blair’s vision come to life. I’m hesitant to call it a psychological thriller, because there are so many great elements from several horror genres that play out throughout the film. The story follows Grafton Torn (Oberst, Jr.), a horror writer struggling with amnesia, and when the memories begin to come back with the help of a beautiful hypnotherapist (Cindy Merrill), the line between horror fiction and reality starts to blur…

Because our protagonist is a horror writer, we get a good mix of all sorts of sinister scenarios in this film, which makes “Deadly Revisions” exciting and kept me on the edge of my seat. Prior to viewing, it was recommended that I watch with the lights off, and I’m so glad that I did, because by the end of this flick things get pretty damn intense.

Bill Oberst, Jr. absolutely crushes it as the disturbed Grafton Torn, with a portrayal of a tortured soul that is both disturbing and utterly heartbreaking. Oberst, Jr. looks so incredibly natural and ever in his element, and he is no doubt the powerful engine driving this film towards its shocking and horrifying climax. “Deadly Revisions” is another excellent example of just how much versatility he brings to the screen, especially in a horror picture.

And while Oberst, Jr. manages to steal the show, a terrific supporting cast and an extremely clever and engaging screenplay no doubt enhances his performance. There were several scenes, in particular, between Oberst, Jr. and actress Lise Hart that sent some serious shivers down my spine.  It’s hard to beat a horror flick with a kick ass story and actors that aren’t afraid to really go for it.

“Deadly Revisions” is definitely worth checking out if you’re a fan of the genre or a horror writer yourself, so keep your eyes peeled hard for this one.  The film is currently in the festival circuit where it has already received several awards, and I have a feeling there will be plenty more to come. Check it, horror lovers!