Los Angeles has been home to some of the most prolific serial killers in American history.  There was, of course, the night stalker, the hillside strangler, the freeway killer and now another, Craig McIntyre’s “The Los Angeles Ripper.”

Kristy (Celeste Martinez) is an aspiring singer who has just arrived in Los Angeles for a fresh start in life.  Living with her lazy cousin and horror fanatic Aunt, things are looking up for Kristy as she makes new friends and begins to take singing lessons.  However, drug dealer Grahm (Randy Tobin), The Los Angeles Ripper, has other plans for poor Kristy.  You see, Grahm likes to torture, rape and murder young women, and he’s damn good at it…

“The Los Angles Ripper” starts with a bang and ends with a bang, take that how you will.  From the very first scene of the film, you know what you are signing up for:  a low budget, gritty serial killer story with a director unafraid to show you the good stuff.  And what else would you expect from a movie called “The Los Angeles Ripper?”  While the body count isn’t necessarily the highest, when Grahm does reveal his sinister intentions to his victims, the intimacy of the filmmaking makes for a quite unnerving experience.  The camera is always no more than a foot away from the victim, often in a cramped room or a van, and catches every grueling detail of the torment of the victims.  The style is reminiscent of the ultra gory 70s exploitation flicks, with a little dab of some zombie feasting as well.  McIntyre is clearly well versed in the horror genre. 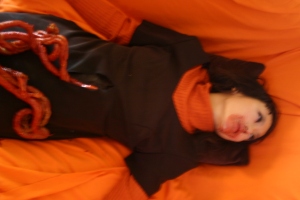 The problem with this film is not in the kills, however, but in the killer himself.  No doubt Tobin is a talented actor, and his character is quite memorable but also kind of a…well…a douche bag.  He’s the guy who’s at the party that you didn’t really invite.  He’s the drug dealer that insists that you hang out with him when you only want your fix.  He’s the guy at the bar that just doesn’t catch a hint.  No means no, Grahm…well, kind of.  At times his awkwardness is hard to watch, but when he starts to turn into the Ripper, it’s night and day.  The douche becomes a monster and that’s when the performance really takes off.

The main meat of the story is when Grahm meets, and ultimately becomes obsessed with, Kristy.  He brazenly stalks her, is constantly showing up wherever she goes and ultimately puts her in a rough spot near the end of the film.  Their chemistry is awkward, but that’s exactly how it’s supposed to be, so in that regard, it works.  The supporting cast behind these two is also quite enjoyable, in particular a couple of characters that show up to Kristy’s music lessons add a light hearted break to the carnage in this film.

Indie horror fans should appreciate this film, especially ones in the Los Angeles area.  It does give you a feel for this city and there are some moments that legitimately made me cringe.  While the film isn’t necessarily as deep as it could have been, the gore is intense and the soundtrack is excellent.  The final shot of the film is also one that will stick with you, a serious gut-wrencher.  I’m a huge fan of serial killer films, and while “The Los Angeles Ripper” isn’t necessarily the scariest, it certainly is worth a look for indie horror lovers and newbies to LA.  So go get ripped already.