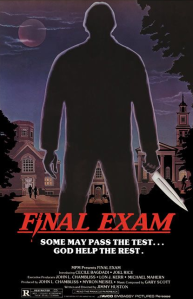 Timothy L. Raynor began his acting career as a fighter.  He started studying martial arts as a child and became a Master Level Instructor.  In the early 1980s, Raynor took the plunge into Hollywood, where he very quickly was able to put his skills into action.

“I got into live on stage fight scenes, you know, for demonstrations for Star Trek conventions and things like that— Sci-Fi conventions.  And a friend of mine said, ‘You know, why don’t you try your luck in Hollywood?'”  And that’s where Raynor met Jimmy Huston, the writer and director of the campus slasher, “Final Exam.”  Huston, looking for an actor with combat and weapons experience, asked Raynor to audition for the most important role in the film: the killer.

At the audition, Raynor immediately made an impact. “The night of the audition I come dressed in this three piece suit, this three pin striped suit, decked out.  And I’ve got all of my weapons,” Raynor told LAHorror.com.  And after showing the producers his skills, they only wanted more.

And Raynor demonstrated that strike on the largest guy in the room who, unknown to Raynor, just happened to be John Chambliss, one the films executive producers.  After the punishing blow to the chest that left Chambliss on the ground, the audition was over.  Two weeks later, Raynor got the part.

Aside from the camera time, Raynor choreographed each fight scene and murder, and after watching “Final Exam,” you can see a raw intensity in each kill.  In one scene, for instance, Raynor had to jump off a 14-foot plank onto his victim, a “groin busting” stunt that they luckily only had to do once.  In another, Raynor pulls a character out of a moving convertible top with one hand.  In one of the longer action sequences, Raynor battled actor Ralph Brown in the school gym that ended in Brown’s character’s death by weight machine strangulation.  That fight scene, which took only 20 minutes for Raynor to choreograph, received a standing ovation from the crew.  However it was during that scene that real death nearly crept onto the set of “Final Exam.” 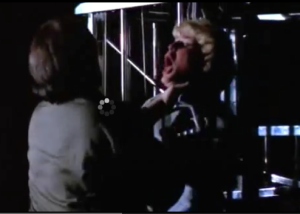 “Well, there were some reporters there, that were from the local papers and that stuff–TV stations–and they were talking to me.  Jimmy wanted to do a close up of Ralph being thrown up against the machine…[Ralph] goes over; he wraps the chord around his throat himself.  He did it too many times.  He pulls himself out, they said “action,” he throws himself back against the weight machine and it tightens up–starts choking him…they think he’s acting!”

Luckily, Raynor noticed the unsupervised stunt in a nick of time, untied the unconscious actor and administered CPR.  Pretty nice move for a killer.

Now 30 years later, “Final Exam” has hit cult status and Raynor often receives autograph requests from horror enthusiasts (he signed our VHS copy himself).  And while Raynor is flattered by the attention, it is by no means his only claim to fame.  Raynor has appeared on multiple TV shows and films, including “The Sarah Conner Chronicles,”  “My Name Is Earl,” Animal Planet’s “Wildlife Wars” and played a different type of killer in the gangster film, “Drop Off.”  While auditioning for “Star Trek:  Enterprise,” Raynor met the love of his life and fellow actress, Tracey Kimball, who was working on the series.  They now frequent science fiction conventions and are currently in pre-production on two sci-fi series of their own.  Raynor most recently portrayed the character of Death in an upcoming short, “Deathwatch.” 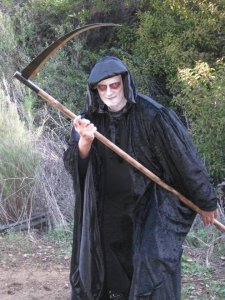 Raynor as Death in "Deathwatch"

It seems that bringing death is just in his nature…

For more on Timothy L. Raynor, please visit his IMDB page.  You can also get a peek into his new Sci-Fi series, “Praetorian,” here.