Alex Ray is back with our second VHS Spotlight, shining the light on some VHS only horror movies that need to find their way onto DVD!  If you’ve got a copy of one of these then take good care of it…now let’s all adjust our tracking… 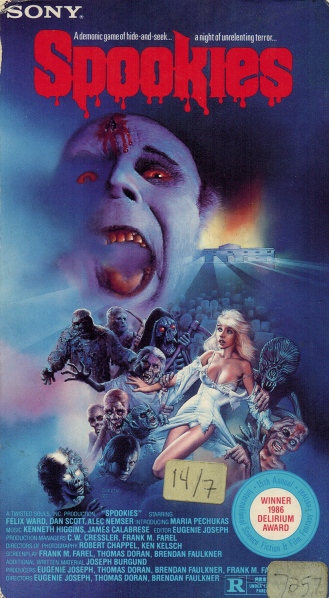 First, a little business: this is available on DVD in the UK. But I’m not counting that. If it ain’t on good ol’ region one in the US of A, it’s fair game for this column. I shouldn’t have to figure out the pound-to-dollar conversion rate just to get my DVD fix. (Tangent: I was totally willing to do so for the awesome Jake West documentary, “Video Nasties,” which is only available on PAL digital video disc–and so worth it.)

Now, on to our show…

The terms “visually stunning” and “special effects extravaganza” don’t carry much weight anymore, but they both apply to “Spookies.” Kind of like “Return of the Alien’s Deadly Spawn” or “Bad Taste,” it’s got a heaping helping of indie charm, along with FX work that puts the big boys to shame–at least as far as quantity goes. Even if the creatures and gore aren’t always on par with KNB or Savini, this is still one of the most ambitious ’80s horror flicks I’ve seen. It’s got a menagerie of monsters to rival “Cabin in the Woods,” and they don’t just pop up late in the flick–it’s a non-stop barrage of cool critters and creepy setpieces.

Let’s play Horror Mad Libs: some ______ get lost and end up at ______ , where they’re attacked by ______ . In this case, the blanks are filled by random New Yorkers, an old mansion, and a cross between Grandpa Munster and The Tall Man. The setup is pretty standard, but once we get past the pleasantries, things start moving along at a good clip. Our characters are picked off by a wide variety of monstrosities (my favorite of which would definitely be the fart monsters, or, as the box describes them: “lust-crazed muck men”) under the command of Old Man Greasepaint, who needs some souls to bring back his dead wife. Of course, things don’t quite go according to plan.

The narrative might not be the strongest (it’s basically the cinematic equivalent of walking through a funhouse), but it’s still a heckuva ride. That is, if you’re feeling nostalgic for ’80s cheese. This is by no means a forgotten masterpiece–just a fun movie with a lot of heart and a few nods to the horrors that came before (“Evil Dead” being the most obvious). If you’re looking for something that lies somewhere on the spectrum between “The Dead Next Door” and “Waxwork,” it fits the bill. 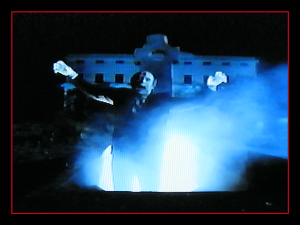 An R1 DVD would be nice, especially if the original Richard Corben poster/box art is used. The UK disc kinda makes it look like something more along the lines of “Demons” or “Night of the Demons” or the aforementioned “Evil Dead”–which it is not (it also refers to the cast as “teenagers,” which they are definitely not). “Spookies” is an entirely different beast (several different beasts, actually), and worth a look–whether you wanna shell out a few pounds for a disc from across the pond, or considerably more in US currency for the VHS. Either way, it’ll make you remember why you fell in love with this stuff in the first place.