I always have an appetite for gore, and “Jet Set L.A.,” a new short horror film from Colin Lawrence, satisfied it in a hearty way.  In this story, a young couple stays in their first modern bed and breakfast. Little do they know the proprietors are cannibals looking for their next meal.  The film runs at just ten minutes long, and manages to pack a lot of character, suspense and carnage into the runtime.

“Jet Set L.A.” is also a horror short with some real style.  There’s a couple of really nicely cut sequences that definitely sent a shiver down my spine.  Coupled with some excellent direction and some creative shots, this film felt slick and polished.  As I feel when watching great horror shorts, I didn’t want it to end and would have loved to learn more about these B&B owners and their dinnertime antics.  And while the basic story has been explored in other films before, “Jet Set L.A.” felt fresh and fun, and did a terrific job building tension as the story unfolded.  A highly enjoyable watch for seekers of gross horror. 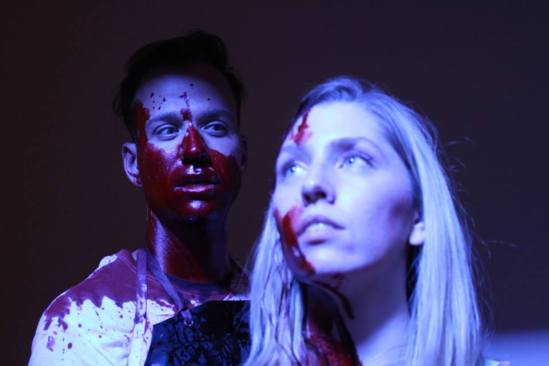 The cast did a great job with this material and kept me engaged.  It’s always fun to have a couple of characters that you care about be in a situation that you know they probably won’t make it out of alive.  Kevin Reich  gives a particularly intense performance as the highly demented Stuart.  A sequence early on involving a wine glass was surprisingly disturbing and set the tone for the entire film.

If you’re hungry for new horror, then definitely keep your eyes peeled for this film as it’s currently hitting festivals worldwide.  “Jet Set L.A.” has already played at the Burbank International Film Festival and will also be screening on Halloween at Bram Stoker Film Festival in England, with more festival announcements soon.  For all of you L.A. locals, catch the film at El Cid’s Short Horror Film Night on October 26th.