Christopher Villa and his Robot.

Since this website went live a couple of months ago, we’ve had the pleasure of meeting some of LA’s most talented, inspiring and absolutely terrifying horror artists.  From actors to writers to filmmakers and more, we’ve met someone for nearly every platform of horror art and expression.  But, today’s featured artist, a gentleman by the name of Christopher Villa, shows us just how deep a love for horror can go and how it can manifest itself in a variety of different platforms.

“I had a real inclination towards the darker side of art…my whole family has always looked at me as not only the black sheep, but the dark sheep,” Villa told LAHorror.com lightheartedly.  And who can blame them?   Villa not only shares the same birthday as one of his greatest inspirations, Edgar Allen Poe, but has also spent his entire career feeding his fascination of horror.  He utilizes multiple mediums to satisfy his inner darkness in both the form of a hobby and a profession.

“I really had a career in the theater for more than 30 years as a choreographer of stage combat and duels and fight scenes and slap-stick comedy, but through the whole period, I always worked on some type of project that had access to the darker sides of my own nature, whether it was a drawing or sculptures or something else,” Villa said.  And through those various forms of expression Villa has created a diverse portfolio of horrific pieces, which include poetry, sculpture, paintings, music and plays.

“In terms of creativity as an artist, I felt like if I ever get blocked up in one area, all I had to do was just switch media and that block no longer existed, and I would pursue that particular style of art for a while until I got blocked up there…and everything kind of steered off to the dark side no matter what I tried to do,” Villa said. 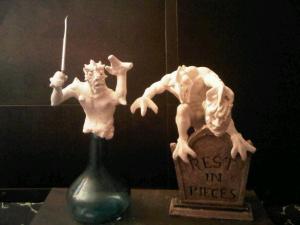 And Villa has truly embraced that dark side and let it steer his creativity.  He is open to its energy and allows it to take hold of his artistic process.  Take for instance his sculptures, “Yargoth” and “Garg.”  Based on characters from one of his own plays, these pieces were crafted with a free form process led by the imagination.  “I don’t really sketch that [many] pre-production sketches in my art.  I really like to let my hands kind of tell me where I’m going with it.  My hands created the gargoyle that you see,” Villa explained of his process.  Each figure stands at roughly 11 inches tall, though Villa has been commissioned to do work much larger than that (see the picture at the top of this story if you don’t believe us).

And the true delight of Villa’s work is not only in the pieces themselves, but his entire approach to the creation of art in general.  He believes there is no reason for inspired individuals to deny their desire to create.  “Art manifests itself through you.  Many people have artistic ability, but most of them repress it in order to fit in….there’s a cubicle of society that they want to fit into and I never felt like I had to fit into this cubicle,” Villa said.  Take note, young horror lovers.

And on a closing note, we’d like to part ways with Christopher Villa by sharing one of his haunting poems.  And if you’re a horror lover like us, we know you’ll love it to death…

To view more of Christopher Villa’s creations and poetry, please visit Capriquarius Arts on Etsy.  You can also listen to some of Villa’s original music here.

Cookies and milk.  Cream and sugar.  Jason and a machete.  Some things are just meant to go together, and Will Penny shows us exactly that in his ridiculous and hilarious comic strips titled “Sex and Monsters.”  We must warn you, fair reader, “Sex and Monsters” is by far the least frightening but potentially deadliest thing ever featured on this website.   Be careful to not die laughing…

Penny’s comic strips are full of, well, sex and monsters, two of every true horror fans favorite things.  He was the campus newspaper cartoonist in his college days, and though he works as a professional in law now, he uses his extra time to continue his passion for art and horror through his comic strips.

“I’m a big horror nerd.  I’m a comic book nerd, but actually I was a horror nerd first.  And I think that comes out of growing up on the old classic black and white Universal horror films,” Penny told LAHorror.com.  Yet, movies alone didn’t do it.  Penny was an avid horror comic book fan growing up and draws much of his inspiration from the comics that used to spook him.  “And of course anytime you mention comic books and horror you always have to drop in the EC comics, you know, the first and last name in horror comics.  So, of course, I was heavily influenced by ‘The Crypt Keeper,’ ‘The Vault Keeper’ and ‘The Old Witch.”

Other notable influences Penny taps into are “Cracked,” one of his favorite horror magazines as well as several writers/illustrators from Playboy.  Together, these pieces are put together in Penny’s “R” rated comics in a ghastly fashion.  (Speaking of which, “Sex and Monsters” was recently nominated for a Ghastly Award, which celebrates excellent up-and-coming horror comics).

Penny is not simply the writer of these strips, but also illustrates and colors each one in a process that can take over a week to complete.  But that is only the tip of the iceberg for “Sex and Monsters.”  Penny also creates hilarious “Crack-Ups,” montages of images from the very same horror movies he grew up watching with hilarious and unexpected punch lines.  Penny has successfully transformed so many once-horrifying characters into the butt-end of some zany humor.  Check out a couple of our favorites.

“Sex and Monsters” is without a doubt one of the silliest things we’ve had the pleasure of reviewing, but the true punch line of all of this is in how Penny came up with the idea for this strip.  You see, “Sex and Monsters” was created by accident in a strange way only just over a year ago.  Penny was trying to get tickets to last year’s San Diego Comic-Con, but they were all sold out.  Determined to attend, Penny got creative.

“I looked online [and thought], ‘What are other ways to get tickets,’ and one of the ways they said you could get into the show, the convention, is if you were an actual professional.  And you applied for a professional pass, but to do that you had to have an actual comic strip up on the web or a book published in your name.  I was like ‘crap, I only have a few months to get something started so I could get tickets to this show.’  That’s basically the genesis of ‘Sex and Monsters,’” Penny told us laughing.  For the record, it totally worked.

Check out Will Penny’s full collection of “Sex and Monsters” at www.SexandMonsters.com.

Alexander K. Harris is a man of many talents and utilizes a multitude of avenues to spread his love for horror.  His photography, graphic design, filmmaking and music composition all have a dark and often gory side to them and certainly are a throwback to the 80s horror mold and style.  And as a new resident of Los Angeles, he is eager to show the horror world exactly what he can do.

“I want to make horror movie posters for a living; that’s why I moved out here,” Harris told LAHorror.com.  “One of my big influences is, like, 80s “B” films…I like the way that movie posters for those films look…I like to recreate different types of movie poster type images.”

And he fooled us!  Prior to speaking with Harris, we were certain his images were actually movies he was commissioned to design for, but they are, in fact, his own creations.  But that’s the reason his work is so fascinating.  His process is simple, yet effective. He layers images he takes of models with often hand drawn art and designs to create a collage of the macabre. His portfolio was even large enough to create his own clothing line, “Chainsaw Mouth,” where you can purchase these images on T-Shirts as well as a multitude of accessories with a morbid edge. 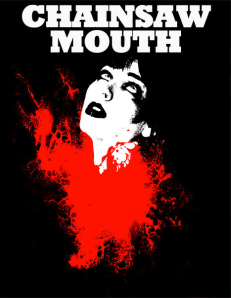 “Chainsaw Mouth is a company that me and my wife started a little over a year ago…I was going to a lot of conventions and stuff like that and I noticed that there was never anything for guys…it was pretty much band shirts or movie shirts and that’s it.  And people don’t seem to buy art a whole lot with the way the economy is right now, so I decided to start putting my stuff on T-shirts….a “B” horror movie type brand,” Harris said.

And aside from his successful indie-line, he is always seeking to expand his portfolio with new images, often covering his models with blood and putting them in horrific scenarios—not literally, of course.  “[The models are] just excited to do something that’s going to look extremely different…If you’re looking for something that’s gonna really pop out in a portfolio, this is gonna be it, because there’s not a lot of people doing this stuff.  The normal girls love to be covered in blood,” Harris said.

And while his design and photography are extremely unique and horrific, Harris also writes and records his own music through the name “Prehumanity.”  Described as industrial, his tracks certainly have a horror vibe, which Harris strives for.   His music could easily be a catchy theme for any genre of horror movie and Harris welcomes the idea of contributing to the soundtracks of horror films.  “So far I have not scored any films, but that’s what I’m hoping to get into in the very near future,” Harris said.  And after listening to his sample soundtracks, you can’t help but imagine a blood soaked girl running from a monster in the woods.  Harris also notably directs his own music videos aside from creating each recording.

To view Alexander K. Harris’ full portfolio as well as samples of his horror soundtracks, please visit his official website.  You can also check out more “Prehumanity” tracks on iTunes.  Also check out his clothing and accessories line, “Chainsaw Mouth.”