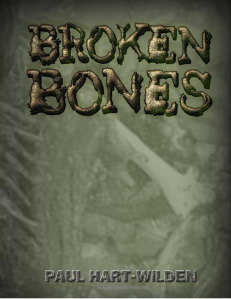 A couple of months ago, LA Horror sat down with writer Paul Hart-Wilden and talked horror.  Hart-Wilden has written multiple horror films (most recently “Wolf Town”) as well as a collection of short stories that he has assembled in his self-published horror anthology, “Broken Bones.”  Hart-Wilden was kind enough to give me a copy of his “Broken Bones,” which I had the pleasure of reading last week.  Just do yourself a favor and pick up your copy right now because this book is legit.

Horror anthologies are tricky, and while I have read several, there are usually only one or two stories that really stand out and are memorable.  That’s not the case with “Broken Bones,” not by a long shot.  In fact, this past week I honestly haven’t been able to get some of these out of my head, not only because they were well written and interesting, but because they were disgusting and gory in the best ways imaginable.  Necrophilia, rape, brutal murder, hatred, demons, child murder, disease, self mutilation, love lost and even a couple of vampires—this book has just enough of everything to satisfy the sickest of horror fans.

The first story of the book, “The Way of All Flesh,” has some of the most graphic descriptions of human decomposition that I’ve ever had the joy of reading.  You can almost smell the rotting corpse through the pages, and hear the eerie sound of a thousand tiny insects devouring a human body.  Not only that, the story has one of the creepiest and most haunting endings that really opens up the floodgate for the rest of the book.  It is the perfect hook for “Broken Bones” and instantly grabbed my attention, smashed me in the face and gave me a nervous anticipation for the other stories.

“Dark Heart” was another one that really stuck with me.  It is a tale about two morticians who have an unspoken understanding about sexual desires, and how to use their surroundings to satisfy them.  However, things get hairy when one of their relatives, a beautiful young girl, ends up in a coffin.  It is incredibly creepy, has two very developed and interesting characters and a disgustingly ironic ending that really made me shake my head laughing.  Paul Hart-Wilden…you bastard…

“Black and White” was probably my personal favorite for a couple of reasons.  The story follows a young white supremacist named Jimmy and his gang of hooligans as they terrorize and ultimately murder a young black man on a night out.  After committing this crime however, Jimmy starts to notice something changing about him that he can’t control – his skin slowly starts to darken – and now the tables have turned and his gang is after him.  It is an excellent blend of social commentary, horror and heart that has a certain weight as you read it.  Not only that, the ending left a giant boulder in my guts that I can still feel now as I type.

I could go on and on about each story. There really wasn’t a bad one in the bunch.  The thing that made this book as a whole so enjoyable was that each story was horrific in completely different ways and often put my imagination in some very dark places.  Hart-Wilden has no problems creating interesting and developed characters in the span of just a couple short pages, only to thrust them into the worst and most gruesome situations imaginable – spoiler alert – a lot of people die in this book!  And not only was this a horrifying read, it was also interesting.  Many of the stories pointed out the true horrors in our own society in an intelligent way.

And lastly (and most importantly), I just need to emphasize once again, this book is sick.  Seriously sick in all the best ways.  And if you’re sick like me, then I highly recommend getting some “Broken Bones.”