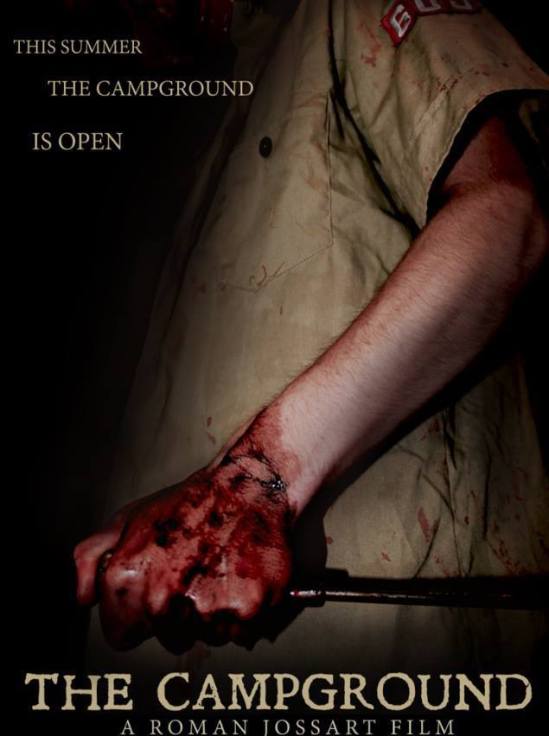 One of the most unique parts about the horror genre, and slasher films in particular, is the charm that they bring to the table no matter the scope or size of the film. No genre has such dedication from fans around the world than horror, and a lot of that is because young filmmakers aren’t afraid to throw their hats in the ring and create their own horror stories for other gore lovers to enjoy. Roman Jossart’s debut feature film,“The Campground,” is a perfect example of a horror fan becoming a horror creator, in a film that creates its own slasher that has no problem terrorizing a group of partying teens.

In 1980, ten-year-old Charlie Varsin was taken into an abandoned campground by his mother to celebrate his birthday. His mother had other plans, however, brutally stabbing the child seven times to the face and six to the chest and heart. Now, 30 years later, a group of partying teens have chosen the old campground to celebrate a birthday of their own, not knowing that Charlie Varsin still lurks about, seeking revenge on anyone that gets in his path. His weapon, of course, is the same rusty screwdriver…used by his mother…only this time it’s Charlie who is dishing out the fatal blows.

Sure, it’s a familiar sounding story, but who cares; this is an uber-campy 80s style slasher movie. The execution does leave a bit to be desired, as there are some head scratching moments and some inexperienced actors, but just by looking at my collection of slasher films, many of my favorites are guilty of the same. And that’s fine. A movie like “The Campground” is made by and for slasher lovers, so casual horror viewers or film perfectionists probably aren’t the target audience anyways. “The Campground” could easily be a gem of some horror lover’s collection down the road.

The standout of this film is actor/writer/director Roman Jossart. His performance is easily the best and most natural, and you have to admire somebody who had a vision, went for it and made it happen. While “The Campground” does have its problems, it’s easy to see the potential and possibilities of things to come for this group of filmmakers.  It will be fun to watch these guys hone their craft and create more slasher disgustingness.

I will say this: “The Campground” did keep me entertained and managed to have a pretty high body count for a film that runs just under an hour. I can’t say that it’s the greatest slasher I’ve ever seen, but it’s definitely a quality, complete debut for a fresh group of young filmmakers. So take it for what it is. If you’re a fan of campy, ultra low budget slasher nastiness, then get your ass to “The Campground”! Charlie will be happy you did…

For more on “The Campground” or to get your hands on a copy, visit the film’s official website.  You can also “like” the film on Facebook and follow the film on twitter!  The filmmaker’s next slasher project, “The Woods Within,” is currently raising funds on Indiegogo.  Check it out here!

There was an error retrieving images from Instagram. An attempt will be remade in a few minutes.