Woodsy slasher films have a special place in my heart.  There’s just something so fun about watching a group of fun loving, beer guzzling friends get sliced and diced deep in the woods.  And Jon Bristol’s “HEAD” is a great entry into this genre, as our heroes find out that they’re camped at the same site that a group of friends were brutally murdered years ago.  Add a couple of sketchy locals and a mysterious writer who just happens to be there to try to solve the murders, you’ve got a pretty solid slasher that delivers on the good stuff.

Don’t be fooled by the cute puppets, guys.  “HEAD” is definitely not for kids – unless your kids are into brutal gore, tent sex and lots of severed noggins.  I guess nowadays, who isn’t?  I loved that Bristol went for a hard R rating for this film, it definitely added a lot and made it super fun to watch.  While the film is very campy at times, it never goes fully over the top and fully respects the genre, which I thought was a great choice.  While “HEAD” is generally light hearted, it does have several surprisingly unsettling scenes, including the climax of the film which I found to be pretty brutal and effective at getting under my skin in a weird kind of way.  Let’s just say you might remember some of these puppets for a while.

And while I honestly feel that this isn’t so much a puppet movie, but rather a horror movie that just happens to star puppets, some major props go to these puppeteers executing this vision.  Weaving in the puppets with real life props and environment felt so seamless, and it helped me get honestly invested in the characters.  On top of that, I felt that the puppets were well designed and each had a great character look.  Some really fun voice acting here as well, I particularly liked the performance from Jim Williams.  Gnarly stuff. 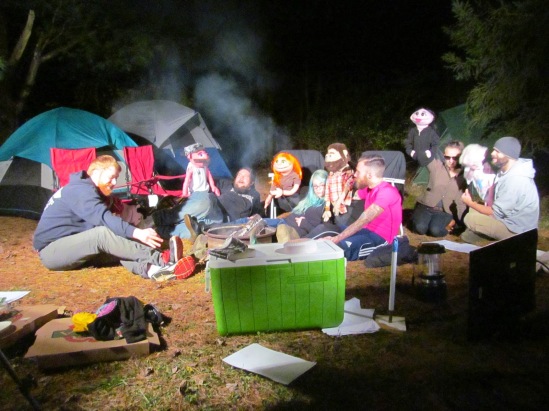 I love ambitious indie horror and this is exactly that.  It’s so cool seeing people tackle the this genre in new and wild ways, and this flick shows what passion and a unified vision can deliver.  On top of that, they made a pretty damn entertaining movie.  Some really great work from Bristol and his team.  This flick is lots of fun if you’re into wild, campy horror…or if you just have a thing for puppets.  Either way, definitely check it when you can!  If you don’t, you might lose your HEAD!